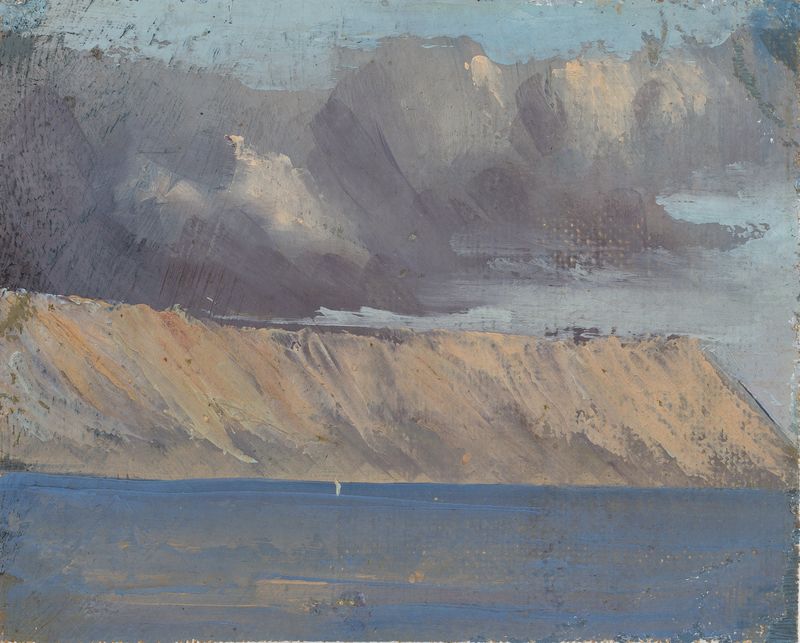 Čiurlionis’ entire oeuvre is imbued with a deep sense of nature. The influence of the pine forest surrounding Druskininkai, the Nemunas river, and the undulating Lithuanian countryside in Čiurlionis’s imagery is well-known and evident in all periods of his work. We do not see the sea so often in Čiurlionis’ paintings, but it is also a very important source of inspiration and a space of symbols, which is present in all forms of the artist’s self-expression. His music, painting, photography, and literature all bear the mark of the images of the sea.

In this exhibition, the metamorphosis of sea imagery, which took place in the artist’s creative laboratory, is punctate. The first images of the sea in Čiurlionis’s oeuvre appear as soon as he begins to paint during his musical studies at the Leipzig Academy of Music, when, during his Christmas holidays, he struggles with loneliness, buys some paint and starts to paint. One cannot yet associate these etudes with the mature world of Čiurlionis’s painting, but already here we can feel the artist’s sensitive experience of the beauty of nature.

In 1903 to 1905, the sea dominates Čiurlionis’ musical thoughts: the first sketches of his symphonic poem “The Sea” are born then, opening a qualitatively new page in his musical thinking. In his music, the sea is now an all-encompassing element, opening up new colour and emotional possibilities, expanding the spaces of expression. Meanwhile, in painting, during this creative period, which one can describe as psychological symbolism, the sea becomes a space for the unfolding of certain symbolic ideas and themes: it is important as a space for the unfolding of the plot in “The Flood”cycle, in the triptych “Rex”, and one of the most famous works of the period, “Serenity”. But here the sea is not yet the main object of representation.

In a letter to his brother Povilas in 1905, the artist confesses his desire to “study nature”. In that year, nature becomes the center of thought in his self-expression which becomes more and more highly abstract. He has not forgotten the sea – in the small sea etudes that were born, the artist captures the rhythms and relationships of the sun, clouds, and waves in very laconic means, creating a sense of space and atmosphere. Here, the sea already becomes the main character. In the autumn of the same year, a visit to the Black Sea and the Caucasus gave us the gift of the sea in Čiurlionis’ photographs. Mountains and the sea, wind and frenzied waves, the play of sunlight on the vastness of the sea – these are the subjects of his photographs, revealing a new interest in the spaces of marine expression.

Between 1907 and 1908, the sea once again became the central subject of the artist’s work: at this time, he orchestrated the final version of the symphonic poem “The Sea”, and composed the triptych for piano “Three Little Landscapes of Marės (the Sea)”, and painted the three-movement “Sonata of the Sea” in the summer of 1908. In all three monumental works, the sea becomes a symbolic space of expression. Čiurlionis feels very confident in capturing the most subtle elements of the sea’s expression, enriching them with meanings, signs, and metaphors. His small literary piece “The Sea”, written at the same time as an illustration of the programmatic symphonic poem “The Sea”, adds another layer of thought to Čiurlionis’ marinist expression. In the summer and autumn of 1908, he composed several piano miniatures, filled with the space of the sea and the imagery of the marine element, in preparation for the composition of his planned opera “Jūratė”.

The exhibition runs until 15 September.

Visitors are admitted in compliance with all safety requirements.